skip to main | skip to sidebar

We are comming up on the 30th anniversary of the crash that ended Operation Eagle Claw. As that time approaches I can reflect on how great it is to be a part of an orginization that is not afraid to try.

The greatest failure is the failure to try. Even though eight men gave their lives that day, the mission appeared to be a failure but it was not. Eight men were a part of a group that was willing to go into harms way even when the odds were astronomically against them, they were willing to try.

They set the mark high. Willing to risk it all to fight for freedom. They gave it all.
Posted by ralph at 12:08 PM 3 comments:

Why did we go to Bermuda?

Why did we go to Bermuda?

It was supposed to be about the boat.

It turned into about the two nuts who had the guts to do it. 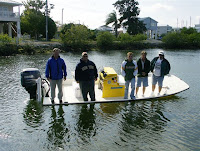 The purpose of the trip was to show that our 21 Ft. Intruder could handle 6 - 8 Ft. waves. Lots of boats can handle 6 - 8 Ft. waves but can they also run in less than six inches, not beat in a chop, and still be reasonably dry. I told a lot of people it could run in 6 ft seas, most did not believe me. I guess one too many laughed at what I said. So I decided to make a statement.

I could not think of anything better than a trip to Bermuda, then on to New York Harbor. It was never about the record, until I learned it would probably be a record. You can thank Bob Hite, NBC Channel 8 Anchor for that, as he was the first to point it out.

The trip had to be unescorted to show that we did trust in the seaworthiness of the boat, and of course God smiling on us, not a larger boat following us.

The above pictures are of two 18's. The yellow 18 belongs to Eric Marshall a professional guide with 5 people on one side, very stable. The white 18 belongs to Mike Embach, here he is shark fishing five miles off of Crystal River, Florida.

Novmember 5, 2007
Guinness Book of World Records(TM) notified me we have the record for the "Longest Non Stop Ocean Voyage in a Flats Boat". WOW, that means we went further across the ocean in a flats boat than anyone else in history. WOW. 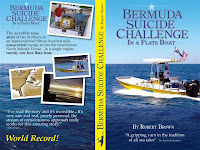 My brother Bob wrote a book about this trip, you can order a copy from him at


The record has also been certified by the World Records Academy
As "The Longest Unescorted Oceanic Crossing in a Flats Boat."
Set by Robert and Ralph Brown for 1547 miles from Atlantic Beach, N.C. to Bermuda to New York Harbor. 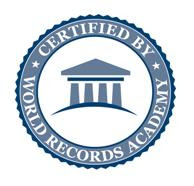 http://www.worldrecordsacademy.org/business/longest_unescorted_oceanic_crossing_in_flats_boat_70139.htm
Posted by ralph at 11:59 AM 3 comments:

DO NOT DO THIS. I AM A PROFESSIONAL AND I SPENT ABOUT EIGHT MONTHS PREPARING FOR THIS TRIP!!!!

In the same area between North Carolina and Bermuda during the same time we were on this trip four much larger vessels had to call in for rescue. Only three crews were rescued. Three professional sailors lost their lives.
DO NOT DO WHAT WE DID.
P.S. In the middle of the trip the Coast Guard sent me an email stating the rescues going on. My wife read the email. She was not a happy camper. Your wife will not be either.

Many people have a little trouble realizing just how far Bermuda is from North Carolina and back to New York Harbor. We thought the picture might put it in perspective. Bob and I trusted this 21 ft Flats boat (Intruder 21) to get us there and back. In the boating community large areas of shallow water are called "Flats." Boats designed to run in these flats are called "Flats boats." The

Intruder 21 handled the waves perfectly. The pictures below are leaving North Carolina weighted down by almost two thousand pounds of fuel as well as equipment and food stores. As we burned our fuel off the boat got quite 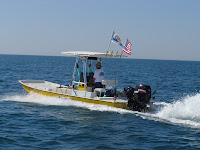 a bit lighter and rode much higher.


This is what an Intruder 21 rides like without all that weight.

Your friends will enjoy this discussion. 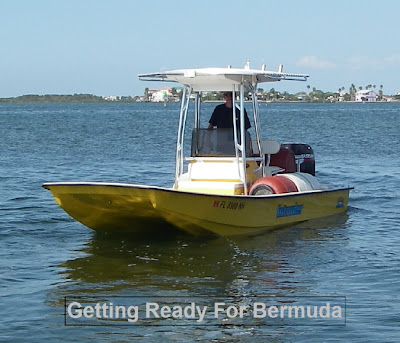 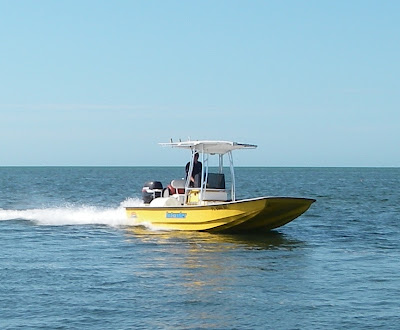 Some call it suicidal, others call it proof.On April 30, 2007, two Tampa Bay men, Ralph Brown and Patrick McMunn will depart the coast of North Carolina in a 21 ft flats boat, headed for Bermuda, and then to New York Harbor, 1,400 miles of perilous ocean to prove the seaworthiness of this unique boat that is also comfortable operating in less than six inches of extremely shallow water, and by God's Grace hopefully set a new world record for unescorted oceanic crossing in a flats boat.
Thanksgiving weekend seven years ago, Ralph and his two boys were boating with Larry Strong and his kids. They hit a rock and broke the lower unit of the motor. A few months later, Ralph’s wife Anne was in a car wreck and had to have extensive hospitalization. His income went down considerably as he had to take many days off work, taking her to doctors. His best friends became bill collectors. Ralph found himself hiding from his problems in a boat design. He gradually became consumed with the concept of making boats that would be able to go over the rocks in shallow water without damage and still be very seaworthy.
After two and a half years, his wife had all she could take. You could not talk to Ralph about anything else. She demanded that he either do it or “shut up.” She thought he was going to shut up. Little, did she know? That night he incorporated as Dream Boats, Inc. He was broke, actually closer to bankrupt, with nothing more than a dream, and by God's Grace a boat load of sheer determination. His first plans did not work well.
He spent four and a half years chasing investors, developing, testing, and rebuilding boats. Over one million dollars later, the finished product is unbelievable; a small extremely seaworthy boat with a simply magical ride. Proving that it runs in shallow water is easy, just ride in it. People who have never ridden in it find it hard to believe how seaworthy this boat is. Now he is putting his life where his mouth is and taking one to Bermuda and back. Some call it suicidal; Ralph calls it proof.
Posted by ralph at 7:41 PM No comments: 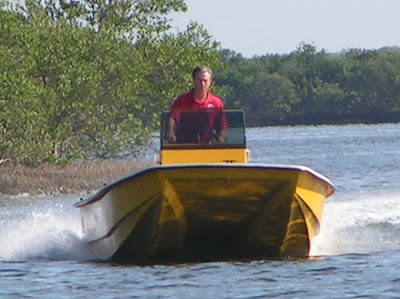 We are attempting to set what we believe will be a new world record for the longest unescorted oceanic crossing in a flats boat. We will be leaving from Atlantic Beach, North Carolina crossing over to Bermuda, then continuing on to New York Harbor, over 1,400 miles of open ocean. The Intruder 21 boat can be viewed in detail at http://www.dreamboats.net/. This is a super shallow running boat that can be configured as a deck boat, or as a fishing boat often referred to as a flats boat. The Intruder 21 is produced by Dream Boats, Inc. Dream Boats, Inc. claims that this boat is the World's most seaworthy flats boat and is seeking to prove it by this trip.We are planning to leave Atlantic Beach, N.C., at 8:30 a.m., April 30, 2007, from the Day's Inn Boat Ramp, 602 W. Ft. Macon Rd, Atlantic Beach, N.C. There will be a chase boat for media to run out for 5 - 10 miles. After going to Bermuda we will continue on to New York Harbor, and dock at the Liberty State Park, (Statue of Liberty State Park), in Jersey City, New Jersey at approximately 8:30 a.m., Friday May 4, 2007. Ralph Brown, can be reached for comment at 352-346-2365 or you may go to http://www.dreamboats.net/ There will be downloadable broadcast quality video after 1:pm April 30 at that website.
Posted by ralph at 7:40 PM No comments: 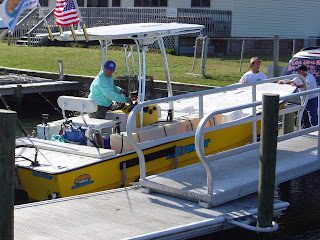 The two Brown brothers began their first leg of the perilous journey to Bermuda and back to New York Harbor, 1400 miles of open ocean. Bob Brown is accompanying his brother Ralph Brown... At 6:00 am Monday morning, the continued preparation began. At around 7:00 am, Ralph and Bob went to fill up four gas tanks totalling nearly 300 gallons of gas. That's 2000 pounds of fuel. An hour and a half later they were at the dock and ready to go. After meeting with the Mayor of Atlantic Beach and making some final arrangements, the Intruder 21 was in the water and all systems were go. A chase boat followed Ralph and Bob out for almost 10 miles, to allow for some photographs and media video. And then just like that, the were off in the horizon. We later received our first satellite phone call from Ralph with a report that everything was going as planned. Due to the extreme weight of the fuel, they were travelling at a slower speed then originally intended. Ralph hopes this will change when they burn off some fuel. More updates to come when we next hear from Ralph. Leave Ralph a comment to encourage him on his journey. 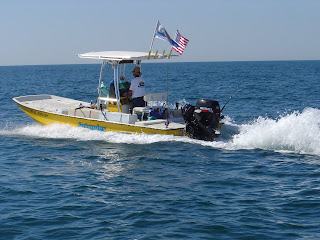